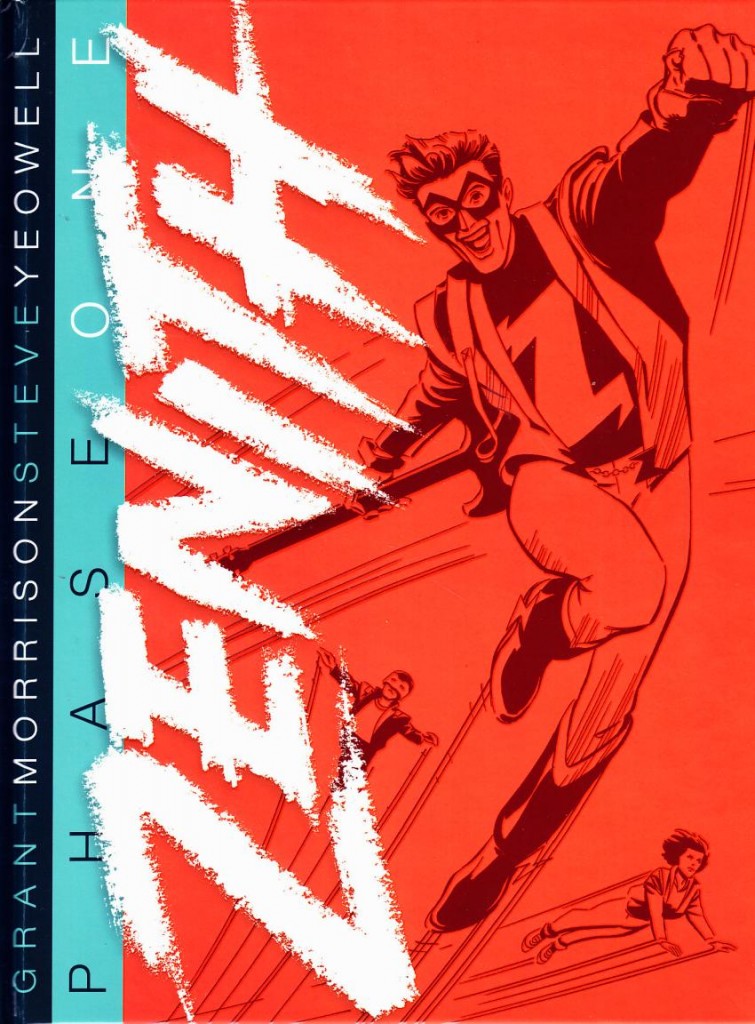 “I hadn’t realised the scale of their plans… Millions of worlds, moving towards alignment… The war that never ends… The Omnihedron… Oh, we’re so small… so…”

Grant Morrison and Steve Yeowell’s Zenith – a rare superhero outing for UK science fiction stalwart 2000 AD – must be one of the most requested reprint titles we’ve been asked for over the years. When will it be reprinted and collected? Finally after a lot of behind the scenes problems (which we won’t go into here, it could fill a whole article on its own) the first of a much-anticipated series of reprints arrives, in a nice hardback edition that resembles the quality bande dessinee of the Franco-Belgian comics market. 2000 AD has a proud history of nurturing new comics talent, and in the mid 1980s they were making a point of giving new series and creators more space, with one of those series turning out to be Zenith. Morrison, of course, has been working away for several years by this point (starting with work in Near Myths in the mid 70s, a collaborative comics work which included early Bryan Talbot work and which came out of the old Edinburgh Science Fiction Bookshop, which would later become Forbidden Planet), but this was one of his major breaks and proved to be a huge hit with the readers.

We open with a flashback to the closing days of World War Two, but this is an alternate history, the final battles taking place in 1944, not ‘45. The Nazis have developed their ‘ubermensch’, a superpowered being, Masterman, but the British, with the help of German scientists who defected to the Allies, develop their own version, Maximan, and the story begins with these two colossally powerful beings in a fight to the death in the bombed-out ruins of Berlin. A fight Maximan is losing to the Nazi creature, who is, it is hinted, more than just a product of science, he is part of a greater scheme involving the ‘Many-Angled Ones’, beings of vast, cold intellect that live among other dimensions and, like Lovecraft’s elder gods, seek to seep into our world, influence and then rule it. But before he can deliver the coup de grace an American bomber, carrying the first operational atomic bomb, delivers its deadly cargo, obliterating the city and both superbeings… 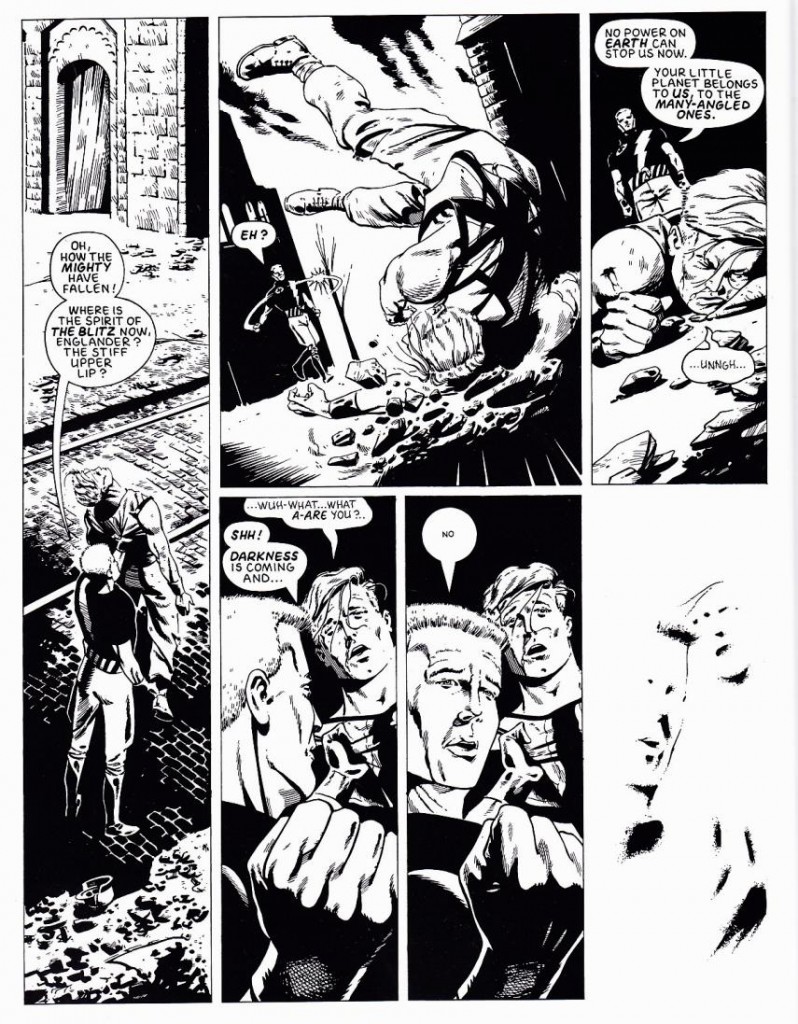 In the 1980s we meet Zenith, one of the few superpowered beings in the world after an international ban on superbeing research – he is the offspring of parents who were part of Cloud 9, a British superteam of the 1960s, developed using the original wartime research, designed to be heroic, patriotic, unquestioning super-soldiers like Maximan. But this was the 60s and like many young people of the time Cloud 9 rebelled, tuned in, dropped out, refused to wear uniforms, to follow any order they didn’t agree with. By the 80s most are gone, some killed, some vanished mysteriously (including Zenith’s own parents) and the remainder have lost their powers over the years. Zenith is no heroic figure either, using his abilities in a purely selfish manner, a very 1980s creature, out for number one, only interested in himself and his pop career and celebrity status.

Until Ruby Fox enters his life; one of the Cloud 9 survivors, now working as a journalist, seemingly now without her powers. But when a secret society resurrects a stored twin of the Nazi Masterman and he attacks her, she finds in extremis that she can still use her powers (allowing her to direct electricity) to fight him long enough to escape and seek Zenith. The petulant, spoiled 80s brat doesn’t really believe her, much less want to help her, but is persuaded when she offers to tell him what happened to his parents if he does. Together they seek out The Red Dragon, a Welsh member of Cloud 9, but the Red Dragon is now plain Siadwell, and he is constantly pickled, and Mandala, a Cloud 9 survivor with powerful mental abilities, who became a 60s transcendental hippy, but has now gone in the other direction and become a golden boy of Thatcher’s Tory government as MP Peter St John. St John refuses to believe them or help, but events may force him to change his mind, as the new Masterman appears on the streets of London… 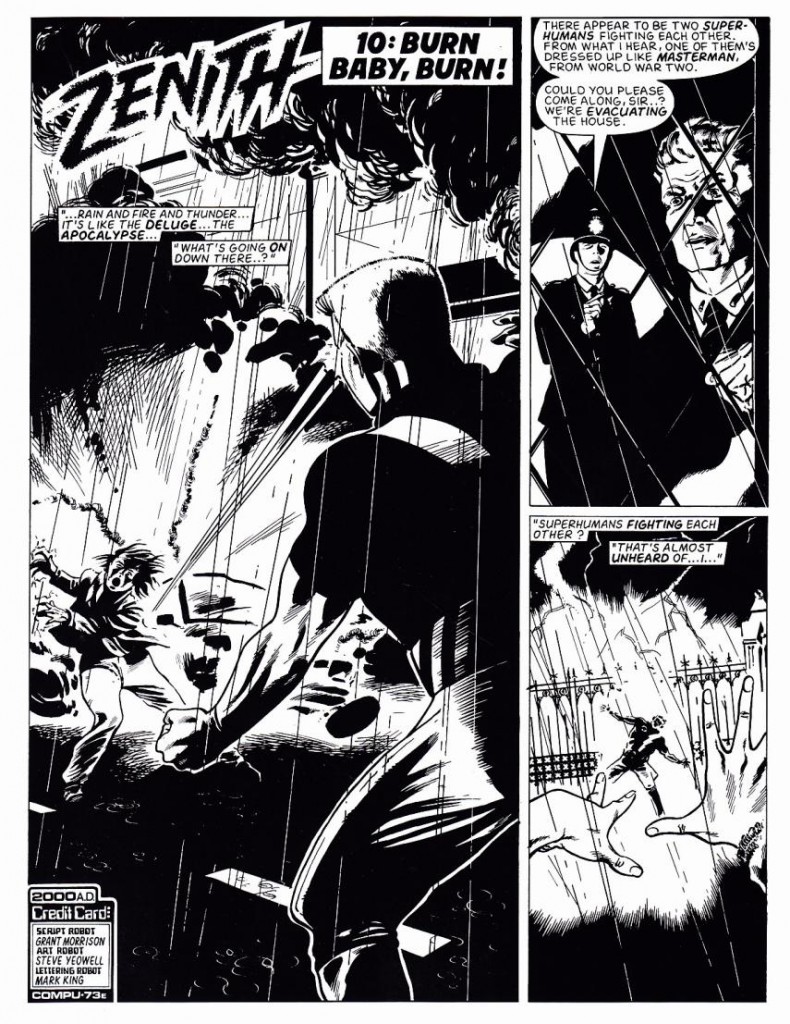 And I won’t go any further on the plot for fear of ruining it – I know a lot of readers will have encountered this story many years ago, but it will still be new to quite a few and I don’t want to spoil it. It is fascinating to look back at this decades on, especially in the light of later work as Morrison moved from fan-favourite at 2000 AD to being an international comics god. Many of the approaches and ideas behind Zenith would be developed and mutated into even more compellingly weird and wonderful shapes for his later work – with that handy beast Hindsight it is particularly interesting to look at Zenith again in light of what Morrison would do with series like the remarkable The Invisibles, for instance.

Not content to simply serve up superheroes even at that early stage in his career, Morrison creates alternate timelines and dimensions, hidden histories, Lovecraftian multi-dimensional beings (who are behind the whole creation of superbeings for their own dark agenda), a serious questioning of accepting authority unquestioningly (see where that dutiful approach got poor Maximan, after all) or taking it as read that the world is at it appears but instead delving behind the curtains of reality to show there is far more (shades of both Lovecraft and Moorcock and more), all ably assisted by Steve Yeowell who crafts some lovely, clear black and white art (although Brendan McCarthy worked on the early designs for the series), rendering a wide variety of scenes, from WWII battlefields to 1980s London to the innards of a hideous dimensional being with equal grace and style. 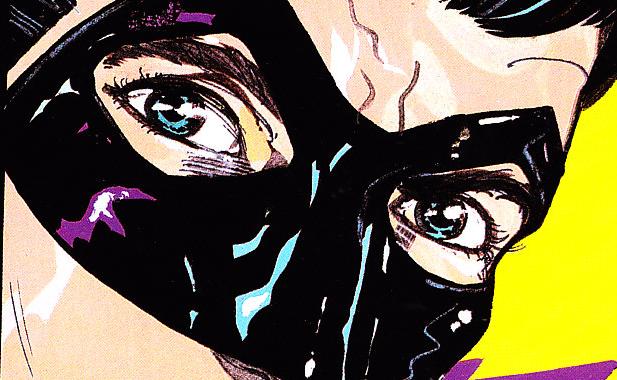 In some ways this has remained a timeless tale of a young, hungry writer getting to let loose with some of the ideas that had been fermenting in his brain, getting to stretch himself and his concepts of not just what storytelling could be but what you could so with the comics medium, something Morrison has pretty much continued to do throughout his career, frequently altering, changing, mutating both his approach and what you can do with the paper-based artificial reality of a world of comics, and it is a pure pleasure to see him again here at that early phase of his career, letting loose with those ideas and developing them.

In other ways though there are a number of elements which remain very much of their time, remain very 1980s, from the spoiled, selfish me-me-me generation epitomised by Zenith to some serious digs not just at the age-old British establishment but specifically at Thatcher and her government (one of the returned Many-Angled Ones seeing the former hippy turned right-wing Tory MP Peter St John remarks to him casually oh yes, we have many allies among you, inferring just how far some on the right would go for power). Those elements are still amusing to those of us old enough to remember the era, they probably don’t mean as much to younger readers encountering this for the first time. But those are only minor elements of the tale, and all tales will have some reflection of the era that shaped them, after all. 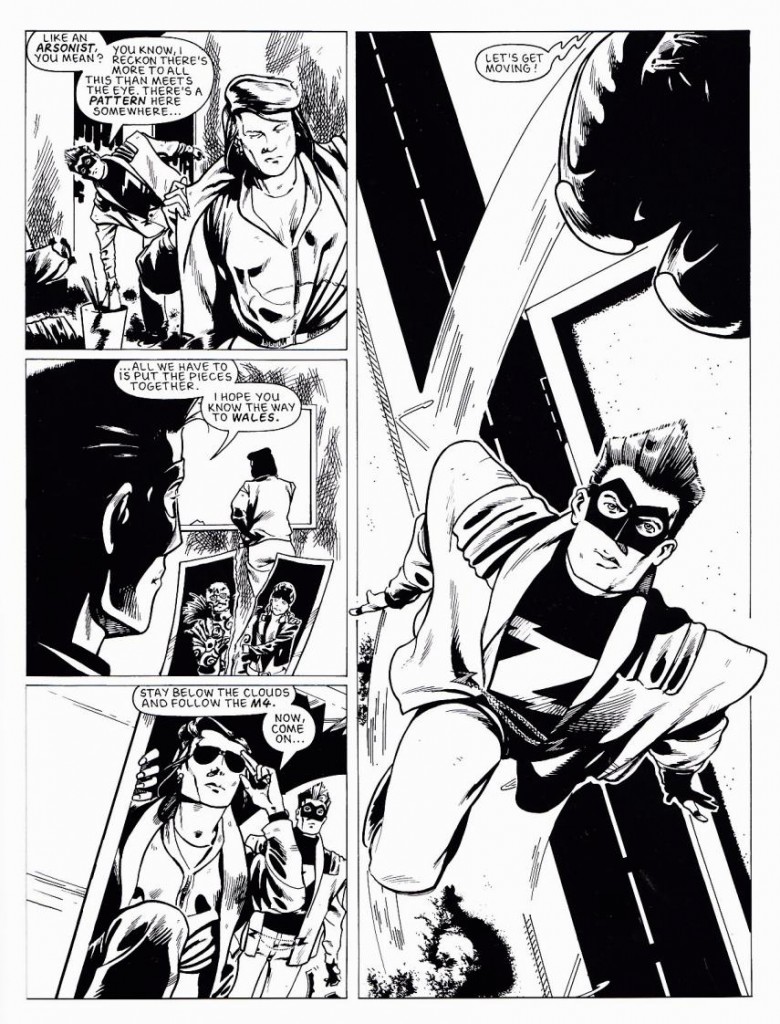 But the main story and concepts remain powerful and compelling, and while superbeings behaving badly or the idea of WWII era super-soldiers is not new, Morrison created a very British, cynical, take on superheroes and what it would be like if they actually existed, and fused this superhero and science fiction approach with horror elements to create something remarkable and magnificent (and sometimes some nice humorous observations – such as how do you get from A to B when you fly? Just having the power to fly doesn’t mean you know where you are going in the air, something I’d never thought of about superheroes till Morrison cheekily worked it in, and when you see it you think of course, why didn’t I think of that before??). A fascinating work in its own right, a ‘lost’ classic of Brit comics now finally available again and an essential part of Morrison’s considerable oeuvre that you have to have on your shelves. Welcome home, Zenith.