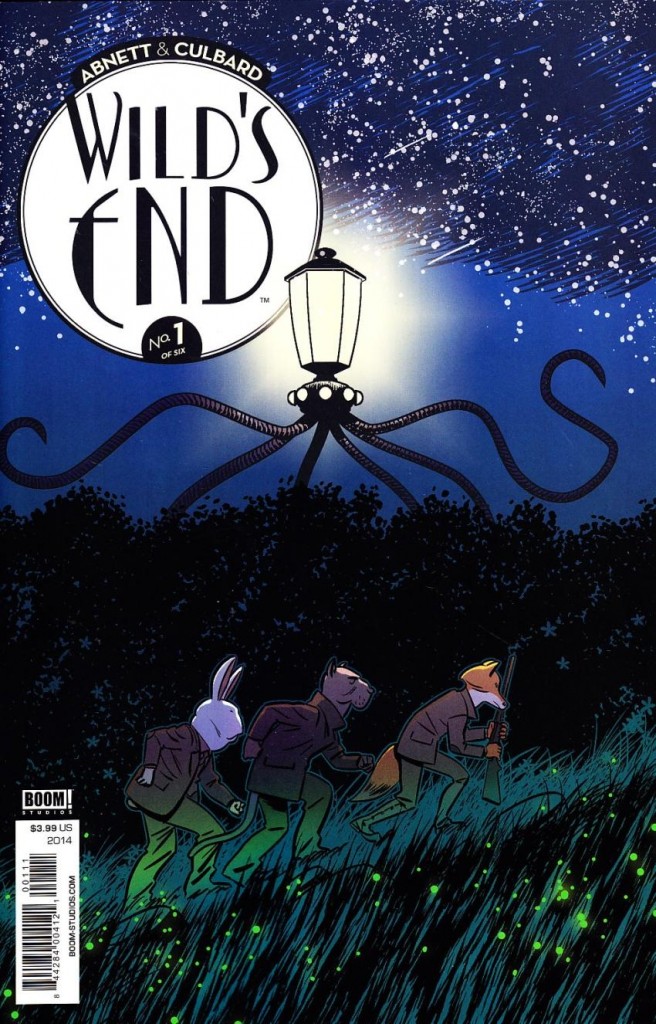 When I see Dan Abnett and Ian Culbard’s names on a new comic, frankly even before I know what it is about, that’s sufficient to make me want to take a look. Add in the fact that we have an anthropomorphic fantasy take on one of the first great classics of science fiction, HG Wells’ War of the Worlds (with a touch of the Archers thrown in for good measure) and you have my undivided reading attention!

We open under a clear night sky in the countryside, away from street lights, a great glowing, indigo firmament specked with sparking stars and a great moon, whose silvery glow lights the way home for Fawkes (a fox person) and his drouthy companion Bodie (a weasel), good naturedly arguing over their bottle of booze as, from the looks of it, they are walking home from a good evening’s poaching. Until they are stopped in their tracks by the sight of an astonishingly bright shooting star describing a great, flaming arc across that wonderful fairy tale night sky. Before they can even wish upon that falling star – still marvelling at how bright it was – the sound of its impact reaches them and they realise it didn’t just burn across the nocturnal heavens, it’s crashed to earth, not far from their quaint little village. Excitedly Fawkes starts out for the site, followed grudgingly by Bodie. 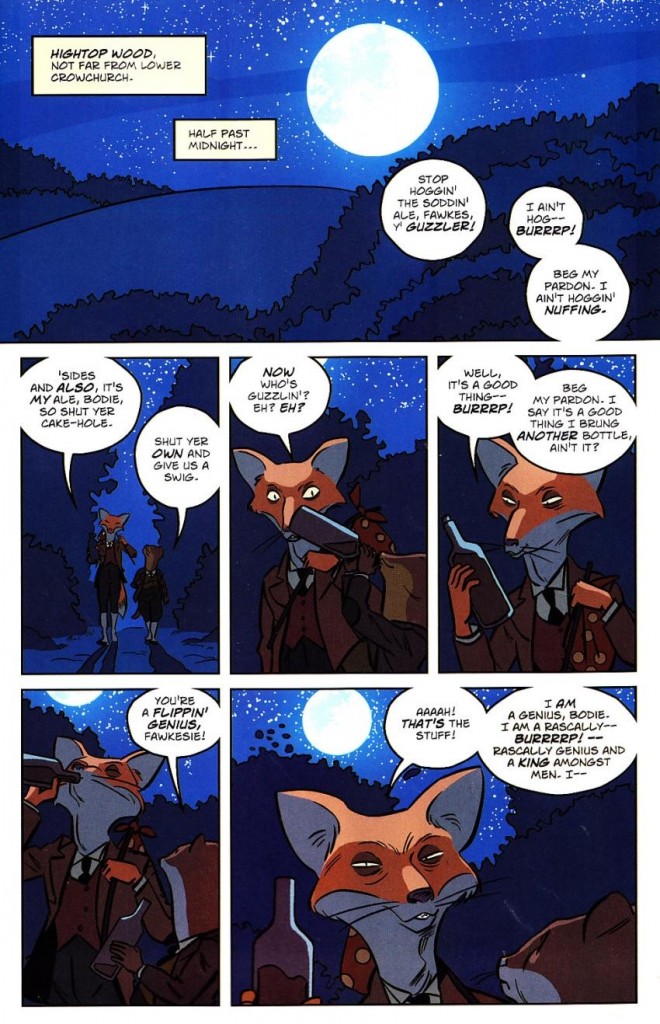 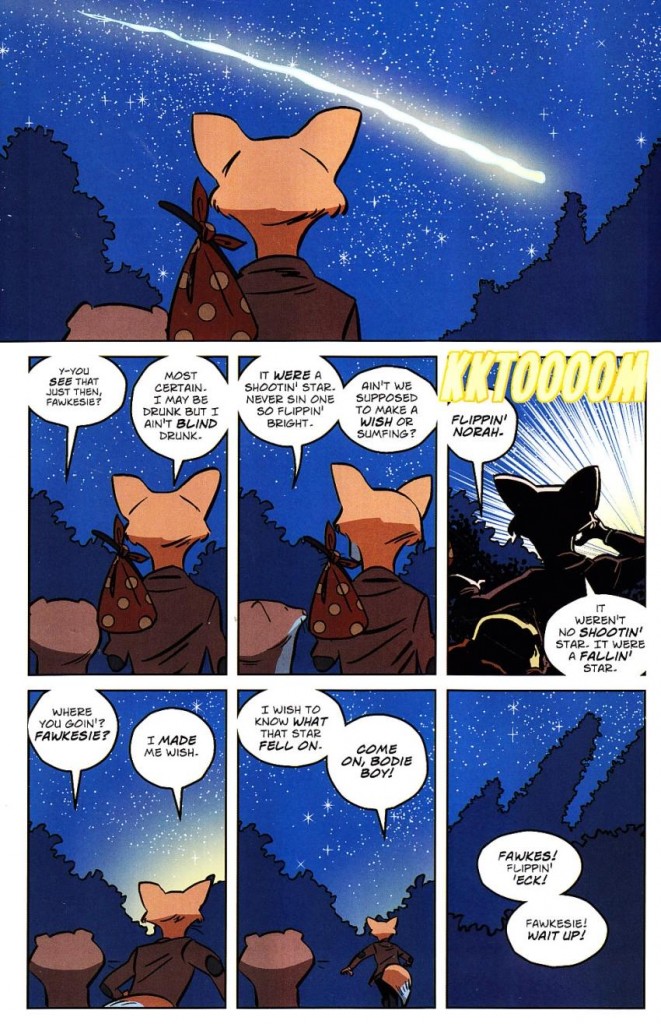 The clear day after the night before and all is peaceful and as it should be in Lower Crowchurch; Mr Slipway (a dog) is very carefully painting his new home, a very traditional thatched cottage, about as picture postcard rural England as you can imagine, having just moved to the village, retiring from a life in the Navy. Two of his new neighbours, Gilbert Arrant and Peter Minks, stop to greet him in a friendly manner, although it is also clear that covertly Arrant (a pillar of the village and, one suspects, the type who likes to know the inside scoop on everyone else’s business) and Minks (a local journalist) are trying to pick away and see what they can find out about Slipway’s past. They invite him to join them in the pub later as the village fete is coming up and a group are meeting to discuss who will do what (although it is fairly apparent this is almost a formality as the same people do the same things each year in this little hamlet – tradition, charming or stultifying, delete as is your taste for such things).

And it’s during this rural chat that Fawkes makes his re-appearance, dishevelled and rambling and ranting about a dangerous light they found in the woods, a light which is deadly. But as a known drunk and poacher none believe him, except Slipway who comments “I’ve seen enough young men gripped in terror to know what genuine fear looks like” and he decides to investigate. But they may be late in checking the veracity of the errant Fawkes’ tale, someone, or something may be starting to investigate their little, peaceful domicile too…

This is a charming piece of work, a sort of blending of Wind in the Willows with HG Wells, and I found the idyllic, rural setting was enhanced by having anthropomorphic animal-people as the characters – they combine, with Culbard’s beautiful artwork, to create that fantasy, picture-postcard view of the idealised countryside English village that probably never really existed quite like that even before the modern world rudely pushed its way in, and yet it’s an image we all know and frequently have great affection for (perhaps not where many of us would choose to live, but certainly to take a peaceful sojourn in). This is only a first issue (of six), but already we’re introduced to several main characters and between Abnett’s dialogue and Culbard’s artwork their characteristics are pretty well established in the reader’s mind. 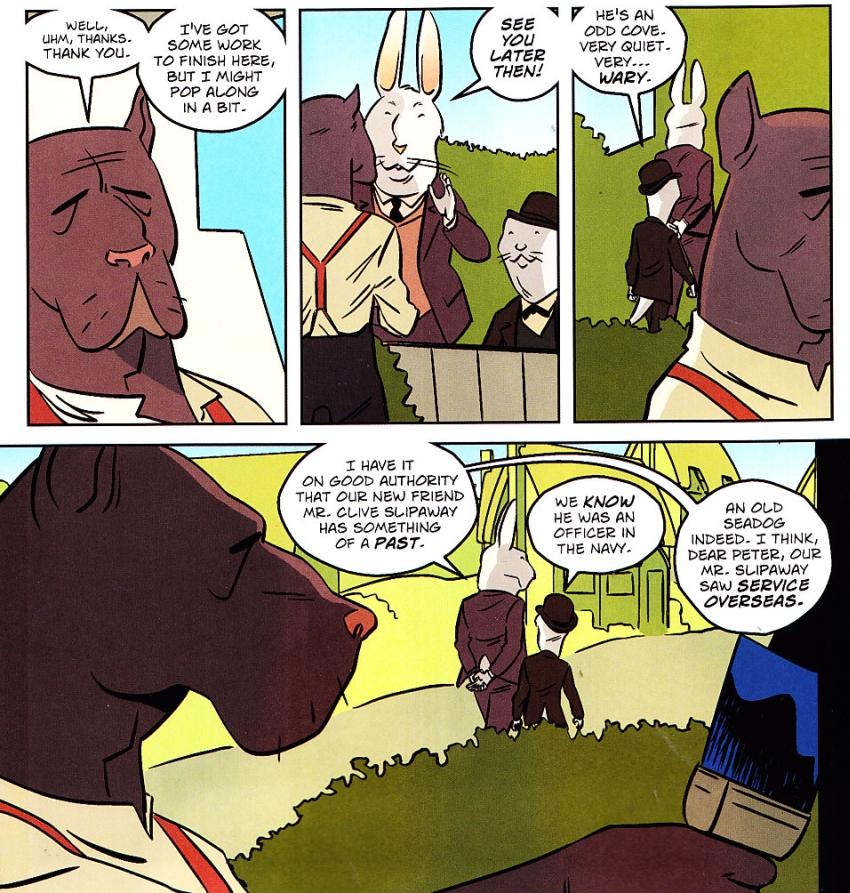 I found Culbard’s approach to depicting Slipway especially effective, not just the way he delineates the facial features, but the angle and pose of the character speaks silently of his mysterious past that Arrant would like to tease out of him, a man who has seen much, done much, some of it, one suspects, the sort of tasks he doesn’t want to dwell on, while his depiction of Arrant is again wonderfully spot-on, the oh so friendly, fine chap who is actually the village gossip and always using his bonhomie to dig out everyone’s secrets and ensure his own place in the local society. Naturally they bring to mind other prominent anthropomorphic characters, such as Bryan Talbot’s Grandville cast, but these creations stand on their own and any comparisons I might make from Wild’s End to Grandville are entirely complimentary. That so much of their character comes through simply from the art is a testament to Culbard’s ability. Matching that with Abnett’s script and dialogue and you have something wonderful. Much recommended. 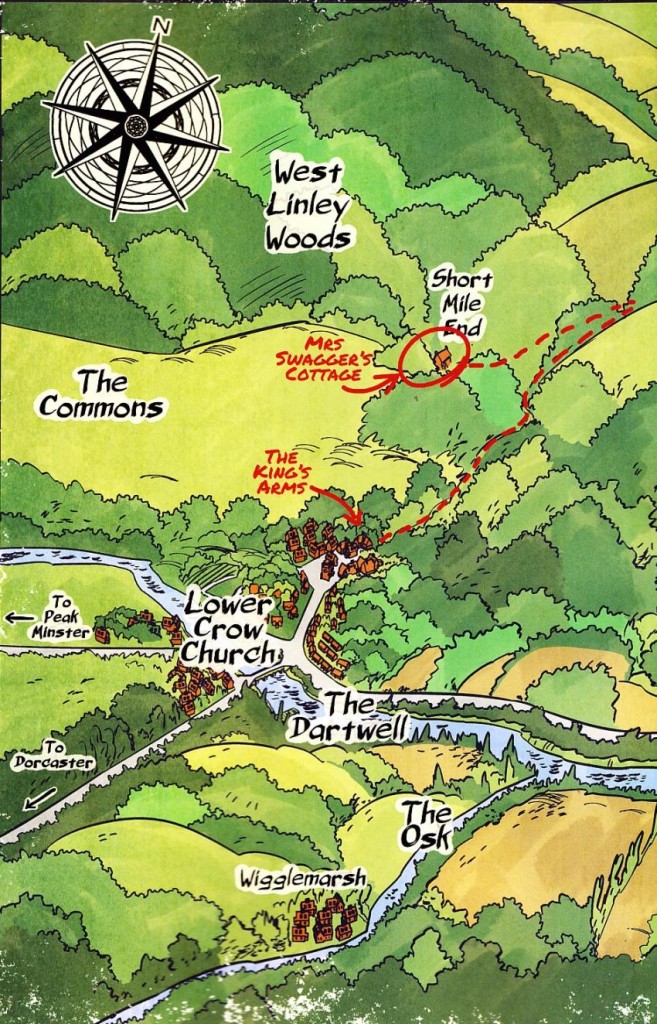 (I can’t resist including this image of Culbard’s map of the village and surrounding countryside – as a friend commented during the recent Edinburgh Book Festival, there’s always something delightful about a map with your fantasy tales, and he’s right, there is)

This review was originally posted on the Forbidden Planet Blog