Space has always fascinated me, perhaps not surprisingly as I was born at the peak of the Apollo programme, just a couple of years before Neil Armstrong’s giant leap on the Moon. I had my little astronaut suit to play in, repeats of the original Star Trek, Doctor Who, UFO, numerous other Gerry Anderson shows – space and an optimism in the future and in our ability to learn to use our own brains and science to better humanity were popular topics (sadly so much more pessimistic today for many). I was a child of the Space Age and then grew up in the early Information Age, I had a stack of astronomy books on my shelves even as a kid (reader then, as now). And then there was Cosmos and Carl Sagan on the television. I read and read, by the time I was 9 or 10 I could tell you the difference between a Gemini and a Soyuz and an Apollo capsule, I knew who Kepler was and how his mathematics shaped our understanding of our solar system.

I loved my books, but in Cosmos I could see it all – a history of science here on Earth and how it applied to our expanding knowledge of the universe itself, not just showing fascinating glimpses of distant creation, but putting it into a context of accumulated knowledge. I didn’t  realise that aspect of it until I was much older, but subliminally the message was received and somewhere inside my young brain, absorbed and applied and forever after I have taken simple delight and pleasure in finding links between pieces of knowledge, that wonderful moment when you realise that something you are reading or watching relates to some other subject you read previously, connection and connection and connection. I still take pleasure when that happens today, and it was a lesson Sagan taught in the original Cosmos, that knowledge is one thing, but the ability to step back, place that piece of knowledge into context, was even more important, because then you start to assemble the jigsaw that shows The Big Picture. We never actually finish that particular jigsaw, because none of us is omniscient, but there’s so much pleasure to be had from assembling and connecting those pieces… 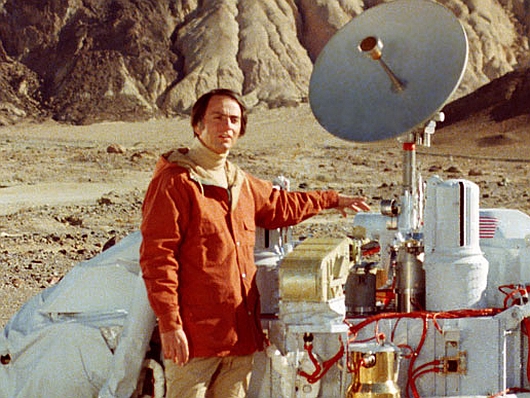 The original Cosmos also helped me humiliate an utter prig of a senior at my school, who tried to make me and my friend feel small and stupid. Back when there was a single BBC Micro for the whole school we were busy programming on it when this senior barged in with a friend, demanding we stop and they get to use it because their science teacher had an “important” programme that “we wouldn’t understand”. I asked what it was, and in a very condescending tone he told us it was to do with Kepler’s laws and we wouldn’t know anything about that. I proceeded to outline the main points of Kepler’s laws and observations and place them in their historical context for good measure. I would only be about eleven or twelve, he was about fifteen. I watched him deflate and become utterly humiliated as it was clear to all in the room that Mr Superior knew less about this subject than a boy did. Thanks to Sagan and Cosmos, where I learned of it then, me being me, I had followed this up by reading more about it. Learning is our friend. And sometimes we can use it in interesting ways, to beat an intellectual bully. Satisfying in itself, and also taught me a lesson too – there’s always someone who knows more than you do…

Sagan’s books and his Cosmos series had a huge influence on me. I think his series and the programmes of the great Jacques Cousteau taught young me an enormous amount about science and what Sagan called “the awesome machinery of nature.” My brain was never terribly good with maths, so studying science at university was never likely, my thoughts were more wired to the arts and language, and I have no regrets over that because I am forever in love with words, but they, and my piles of related books, left me with a huge fascination for an and appreciation of science and learning. And space exploration and astronomy especially, but again there’s that thing about learning being linked – learning about theories of how the other planets became the way they are prompted me to read some geology to understand this better. As a kid I also loved dinosaurs (which wee boy doesn’t?) and of course that linked with geology, which also lead into theories of evolution, which in turn lead to books about why it is humans can think, have language, create abstract thought, the very faculties that allowed for astonishing things like space exploration. There it is again, link, after link after link, all adding layers of context to what was learned. 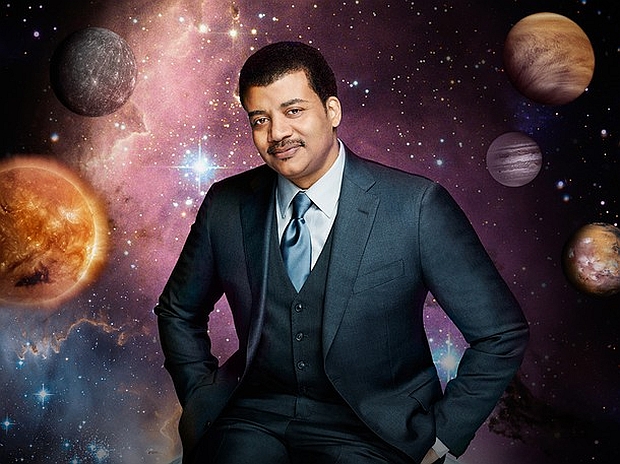 And so this evening the much anticipated new Cosmos made its UK debut, with an introduction by President Obama, no less. Of course dear old Carl has been gone for a number of years now, but his influence is still felt, from his own opening narration and choice of similar location to that he used for his original introduction to the use of the ‘spaceship of the imagination’. And the new presenter, Neil deGrasse Tyson also embodies another link to Sagan – a joyfully personal one too, as he recounts at one point how as a seventeen year old student Sagan had invited him to visit. He arrived during heavy snow and Sagan talked to him, showed him his lab and offices at Cornell and presented him with a signed copy of one of his books (which he still has), an encounter which enthused the young man not only to a career in science but to emulate his role model in communicating science to a wider audience, to let everyone share in the knowledge and consider its implications and possibilities, which is important given how such matters often affect all of civilisation.

And so the new show’s first episode this evening… The format is similar to the classic Cosmos, the mixture of astronomy but interspersed with history, both human history of ideas and understanding and the deeper history of our own world, solar system, galaxy and universe. Again, context, links, without which facts don’t mean much. Of course the graphics are vastly superior to the effects the 1980 show could ever hope to create (although back then I still remember marveling at them). But the most important quality, more important than the scientific facts, the history, the learning, was something Sagan gave me in the original, Cousteau did with his shows, Arthur C Clarke did with his books – and that is the quality of sense of wonder. Simple as that – a sense of wonder that makes you feel like a bright eyed child again staring at the stars and imagining and dreaming.  And yes, the new show had that sense of wonder.

You can read a short interview with the new Cosmos presenter Neil deGrasse Tyson on the Nat Geo site.