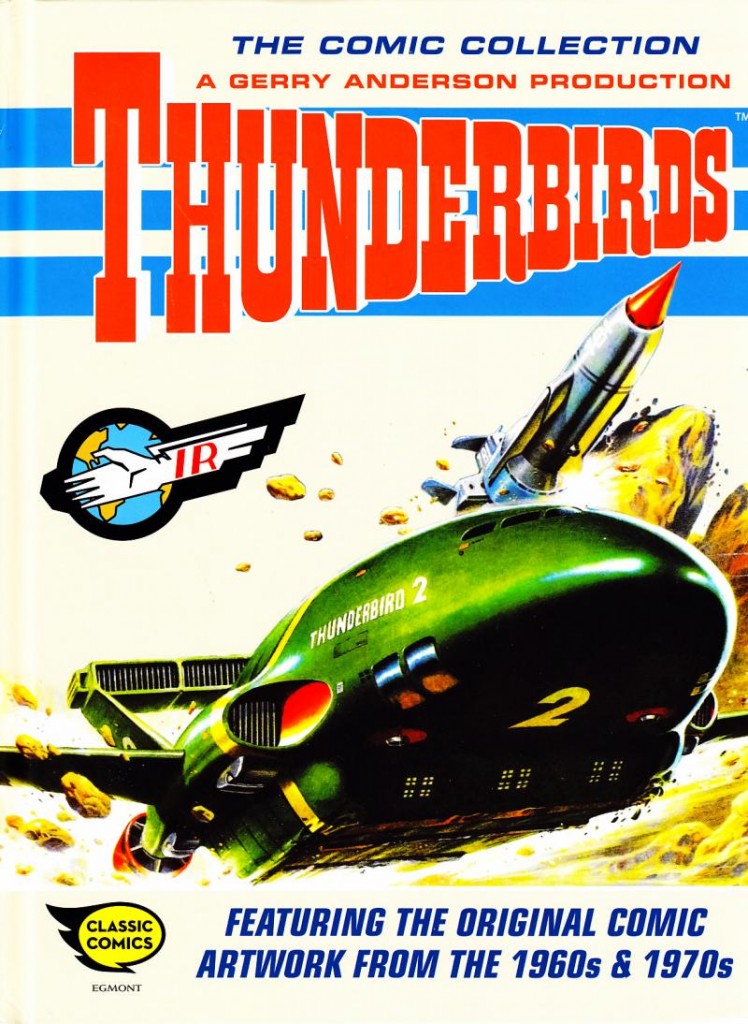 Ah, Thunderbirds, perhaps the most loved of all of the late, great Gerry Anderson’s ground-breaking science fiction shows, one of those shows that continues to capture the imagination of new generations time and again. I’ve always loved Gerry’s shows, they were pivotal in shaping the imagination of so many of us growing up, and his groundbreaking, superbly detailed Supermarionation creations like Stingray, Joe 90 and Captain Scarlet offered us high adventures and beautifully realised science fiction futures. Probably fair to say none more so than Thunderbirds, with a whole family dedicated to saving lives in disasters with International Rescue, using the most astonishing fleet of craft, all their own creations, all intricately crafted by Gerry’s team, so much so that kids (and us big kids) still lust after the toy versions today.

Gerry Anderson was determined to widen the access to and appeal of his shows and TV Century 21 – later simply TV21 – would become a fondly remembered part of a now largely vanished era of British comics history, when every single week kids, literally by the million, picked up their new comics, read them swapped with siblings and friends for other comics – we devoured them. Anderson being Anderson though he was not content to have anything less than the best, so TV21 used superior (for the time) printing techniques and top-flight artwork to showcase his creations in comics form (remember this is the man whose model work was so good Kubrick wanted him to do effects work on 2001; Anderson turned him down, too busy with his own shows). 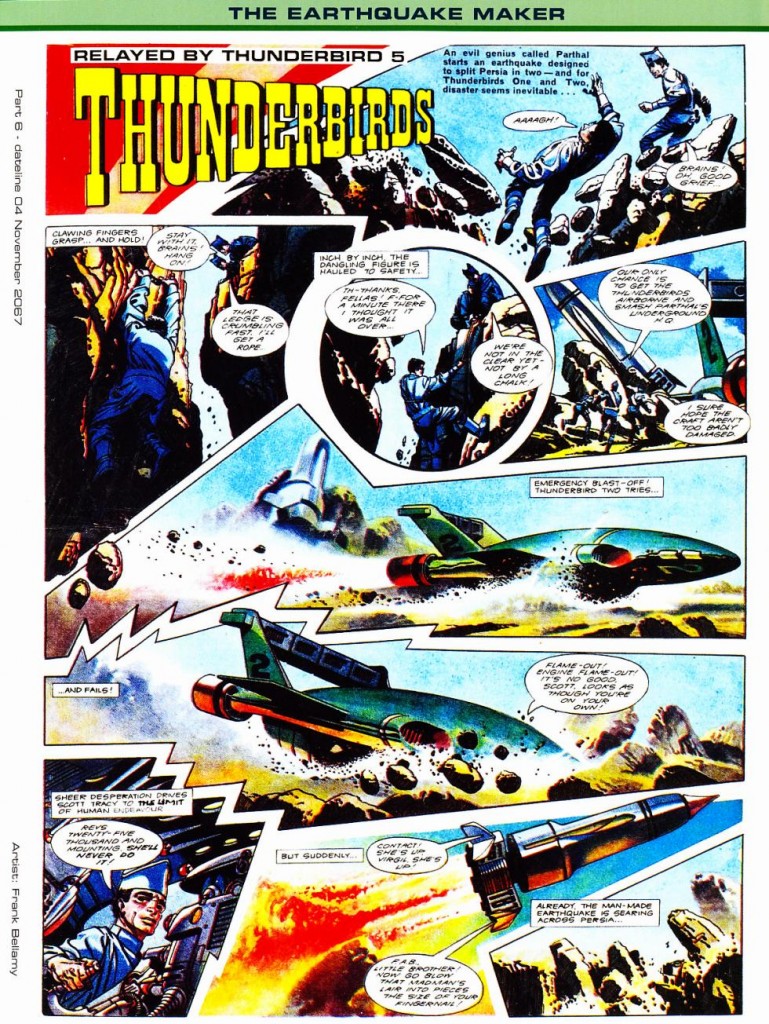 And it shows that higher production value in this lovely hardback volume from Egmont, which is a total must-have for anyone who grew up on Gerry Anderson shows, or indeed who just admire some very fine British comics. The fact this was aimed at a young audience didn’t mean they skimped on quality, so in came one of the most legendary artists in Brit comics, the great Frank Bellamy. The technical aspects of the superb quality of Bellamy’s art has been discussed by those far more qualified than me, but suffice to say it is simply beautiful, beautiful work. Freed of the constraints of 60s television effects and budgets Bellamy’s imagination could run free and create scenarios for International Rescue that simply couldn’t have been executed on the small screen at the time, even with Anderson’s skilled team – this is Thunderbirds unlimited, the comics form freeing the imagination of the creators so we can go from giant earthquake machines and shattering cities to deep jungles in South America, crashing spacecraft, giant aliens running amok, we soar through space, underwater, and Bellamy’s strength is not just in the artwork itself but also in his experimentation with how to lay out the panels on a page to increase the atmosphere and vibe of a story (something some modern artists like JH WIlliams III do so well too), and that experimentation is all the more impressive looking back and thinking this was the mid 60s and in a kid’s comic!

This is what science fiction adventure is all about for a young reader (and those of us who never quite lost that quality as we got older) – the sheer sense of wonder and excitement, but also carrying a message, just like the television shows. That there are good people, heroes we can look up to, who do the right thing for no other reason than it needs to be done. Yes, that may be a bit of a naive, even simplistic approach to a hero figure to today’s more cynical, media-aware eyes, but, dammit, sometimes you just want that simpler hero, the firm-jawed, Dan Dare inspired British hero, uncomplicated, resolute, determined… And I don’t think there is anything wrong in yearning for that sometimes – and, simpler or not, those sorts of characters are, I think, good for young readers especially; it’s perhaps not who they can ever be, real life, they will find, is more complicated, but it gives them something to admire, to aim for, an ideal standard, and that’s not a bad thing. And along the way they enjoy hugely inventive tales of great daring and adventure. 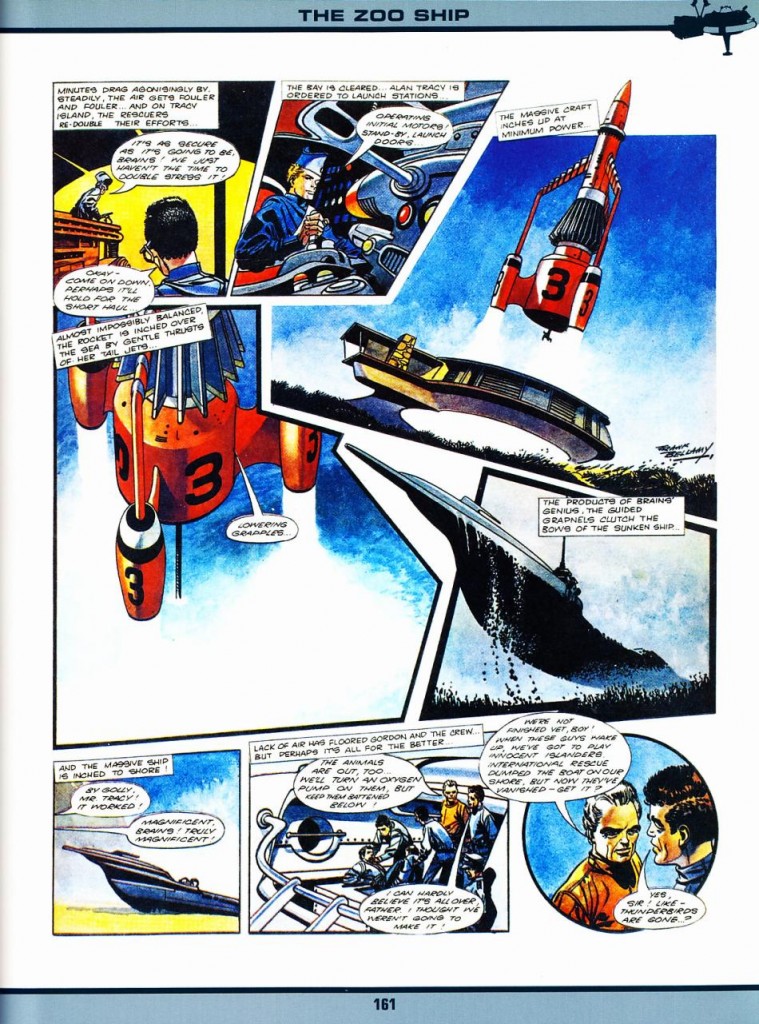 Bellamy’s glorious work is joined later on by John Cooper, different from Bellamy but still terrific stuff, especially remarkable for a kid’s comic of the period. And as an added bonus Graham Bleathman’s wonderfully intricate and detailed cutaways of the Thunderbirds are included, lovely double page spreads showing inner details of those magnificent machines. I’ve loved those cutaway illustrations since I was a boy and they still draw my eye today. In addition to the main Thunderbirds strips from the 60s and 70s this handsome collection also includes the Lady Penelope series too.

In some ways these comics, like the show which inspired them, is very much of its time. An era when humans were just starting on the road to the stars, the dawn of the Space Age, that huge optimism that after the Second World War now we would turn our inventive minds to using our rapidly growing scientific knowledge for good, that new technology and science could – and would – cure all problems, feed the world, heal the sick, deal with disasters and reach out to take us to the stars themselves. We’re more cynical today, we live in an age far more technological than even those 60s dreamers could have imagined, where most of us have a phone in our pocket with more computing power than the Apollo programme had, but although we use it every day we are far more wary of the pitfalls of technology and we have seen that science, like any human activity, can be used for ill as well as good.

In some ways though that adds to the nostalgic, warm glow of this collection, the desire to enjoy again that simpler time and simpler heroes who used their incredible inventions to save lives. It is so very easy to let yourself be lost in that world again for a few enjoyable hours. And let’s face it, when our 24 hours news brings reports of some awful disaster, earthquakes, fires, floods, is there any of those of us who grew up on these tales wish, deep down, that there was really a Thunderbirds cadre of craft who would ride out to the rescue? Impossible for some of us to hear that distinctive Thunderbirds theme and not want to be with those heroes, doing great deeds. It still works on the inner kid in the adult reader, and I think it will still work that most special of things, the sense of wonder and adventure, for the younger readers, just as the show still captures the imagination of new kids today. And even leaving that warm nostalgia aside these are simply terrific adventures for all ages, executed with some amazing artwork.

And as we’ve noted on here before, we’ve seen a lot of classic American comics given the deluxe treatment with handsome hardback archives, but sadly not so much for our rich British comics heritage, so that makes this a special treat, a handsome collection of some wonderful, classic Brit comics. On a related note Egmont have also released some more classic Brit comics fun at the same time, the three boxsets of postcards drawing from Brit comics, with a set from Battle, a set from 70s Girls’ Comics and yes, of course, there’s a set of Thunderbirds postcards as well. As with the book all looking rather good for the gift idea for a certain big seasonal event in a couple of months…