For the next of my Reviews From the Past I’ve dug out a review of another popular science book and yes, it is another one I found utterly fascinating, a look at some quite incredible mechanical automata, ingenious clockwork devices of astonishing intricacy which counterfeited life. As well as entertaining they also raised philosophical questions about the nature of life and the possibility of artificially creating life and intelligence, questions which have come to the fore once more in our digital age as we build ever more powerful computers, learning system and robotic designs. Its a story of invention and showmanship that takes in crowned heads of Europe, signatories of the Declaration of Independence, Edgar Allan Poe, Charles Babbage and even PT Barnum as the Mechanical Turk crosses continents and history. This review dates from 2002 and first appeared on The Alien Online. 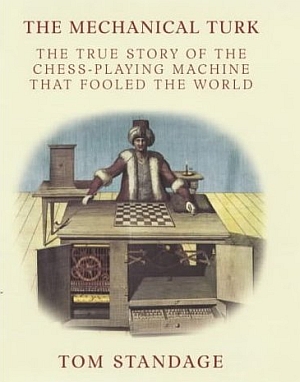 A chess playing automaton from the 1770s – father of modern AI or a clever illusion from an age of wonders?

It is the mid-1760s, the beginning of the Age of Reason. Science and engineering are creating new wonders almost every week. Intricate clockwork automatons are devised which highlight the ingenuity and skill of the mechanical age – skills often used for more practical purposes, such as Watt’s perfection of the steam engine or Jacquard’s loom. Mechanical trumpet players and flute players, with moving fingers, artificial lungs and a range of music to play. Mechanical ducks that swim, splash around, flap their wings and even eat food proffered to them. Such devices delighted the Europeans of the time, much as the Victorians would delight in intricate clockwork toys for their children a century later. Into this time comes the Turk.

Devised by Wolfgang von Kempelen, a nobleman in the service of Empress Maria Therese, this was a life-sized automaton, dressed in the oriental style popular at the time. Seated at a cabinet with a chess board before him, this Turk was rotated around on castors while his panels and doors were opened and a light shone through to show his inner workings and ensure no trickery was possible, much in the way a stage magician will do with his cabinet before an illusion today. A challenge for a player was given and soon the Turk was not only astounding the court by playing chess against a man, he was beating the human player. Mechanical fingers grasped pieces and moved them precisely, his hand would rap on the cabinet impatiently if the opponent took too long to move and illegal moves were swiftly adjusted.

Kempelen was keen to move onto his other devices, but the Turk was to overshadow him for the rest of his life. Ordered to take it around Europe, it appeared before the great and good of the land. Doctor Johnson and Charles Babbage were amazed by it. Babbage, like many was not sure it was truly machine intelligence, it may have been a trick. But if it was true mechanical thinking, then could he not use similar mechanics to create a calculating machine? A Difference Engine? Napoleon plays the machine, as does the great American scientists and diplomat Benjamin Franklin.

Long after Kempelen’s death, the Turk had his career, now under the stewardship of Maelzel, an automaton maker with a flair for showmanship. A young Scot is intrigued by the device and the speaking machine of Kempelen’s which has been fitted to it to allow it to say ‘check.’ An artificial voice? Could such a voice be transmitted in some way, Bell wondered, as with the new-fangled telegraph?

In America the Turk plays the last surviving signatory of the Declaration of Independence (it throws the game) and is written about extensively, just as it was in Europe. Many speculated about what trick it conceals. Is there a dwarf hidden in a small compartment inside the machinery? Is it a double amputee Polish officer hiding form the Czar? Or does the operator use magnets or wires? But it is moved around and opened, so how is this possible? Such speculation followed the Turk for a century and only increased its popularity. Even Edgar Allan Poe attempted to rationalise its mysteries, using a scientific detective model, which he would later use in his novels.

As with the wonderful Map that Changed the World by Simon Winchester, Standage has created a compelling science history, which is as fascinating for the historical figures and events around the main character as it is for the actual tale itself. The idea of this device inspiring Babbage and laying the foundations for the information age, for Bell and his telephone – even the later operator Maelzel giving lessons in showmanship and publicity to a young P.T. Barnum – the characters are fascinating. Of such little interconnections are our histories made, as intricate as the clockwork of the automatons themselves.

Standage brilliantly captures the mood of a world where knowledge was progressing quickly and engineering the casually miraculous was becoming an almost everyday event. He wisely keeps his chapter on the real secrets of the Turk to the end of the book, allowing our interest to peak. We all loves a good show and we all love a good mystery – the Turk gave both for a century, as well as fuelling speculation about artificial intelligence to this day. The final chapters discuss chess playing machines and computer intelligence in our time, from the brilliant Alan Turing’s early programming to IBM’s Deep Blue finally beating the human chess champion, Kasparov. This final chapter cleverly reminds us that our own time has produced great marvels of our own, that we are direct inheritors of that age of genius and passion. This is a delightful scientific history that will appeal to the sense of wonder in us all.