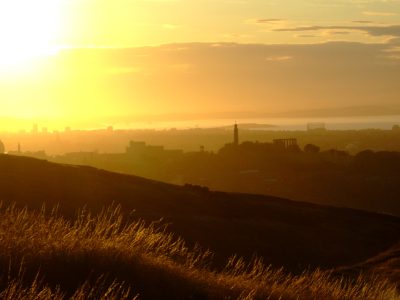 The view from the top of Arthur’s Seat last night as the sun set across the city, dipping down over the Forth towards the hills of Fife. My friend Gordon decided on a whim to take Bruce the dog for a walk since it was such a fine evening and I went along – and this was the view we found as Bruce ran around looking for rabbits. I’m surprised this came out – no tripod, handheld and looking right towards the setting sun, I thought it would come out blurred and glared out. At the very top were tourists as well as locals enjoying this sight, as the world turned copper in that magical transition zone between the light of day and the dark of night, that magical realm of twilight when the Fair Folks were believed to come out to play in our world. I wonder, did our distant ancestors stand on this spot after the retreat of the great glaciers had sculpted the land, looking out at this view, praying for the sun to return.

I shot this brief video from the summit to give a 360 panoramic view; just think, this is a view millions of years in the making. Continents moving, crashing into one another to raise the mountains that shape Scotland, volcanoes born and then dying, glaciers passing, carving the world, people arriving, building, changing. I love that we have an extinct volcano right here, in the middle of a Royal Park in the heart of the city (I don’t love how I huff and puff going up it these days – in my 20s I cycled up and down this all the time easily). And Arthur’s Seat itself is part of our history – from the mysterious small coffins found here with little, rudely carved dolls in them (some think they were left as memorials to to Hutton, standing there pondering the mystery of the rocks themselves and forming ideas that would give birth to the science of geology and our modern understanding of how our magnificent world formed.