JPL and the ESA have announced that the Cassini probe has found a small, previously unknown moon around the giant world Saturn the sixtieth so far discovered around the ringed world. It may be a tiny lump of rock and ice but I love the fact that almost 50 years after Gagarin’s first space flight our own solar system is still surprising us. Makes me wonder what we will discover when we finally get further out (and why haven’t we pushed further, we let ourselves get so small after the Apollo missions…) 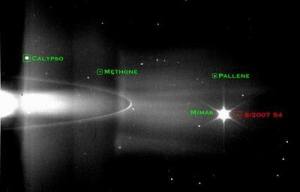 Elsewhere on the ESA site there’s a function to listen to the Huygens probe which descended into the large moon Titan from Cassini. The sound files aren’t especially interesting as such, in fact is is just a rather dull sequence of white noise, but the fact the first one is a recording of sounds heard on an alien world is. Sounds from a world no human has walked on, beamed across millions of miles to be heard for the first time in human history. Now that is impressive.