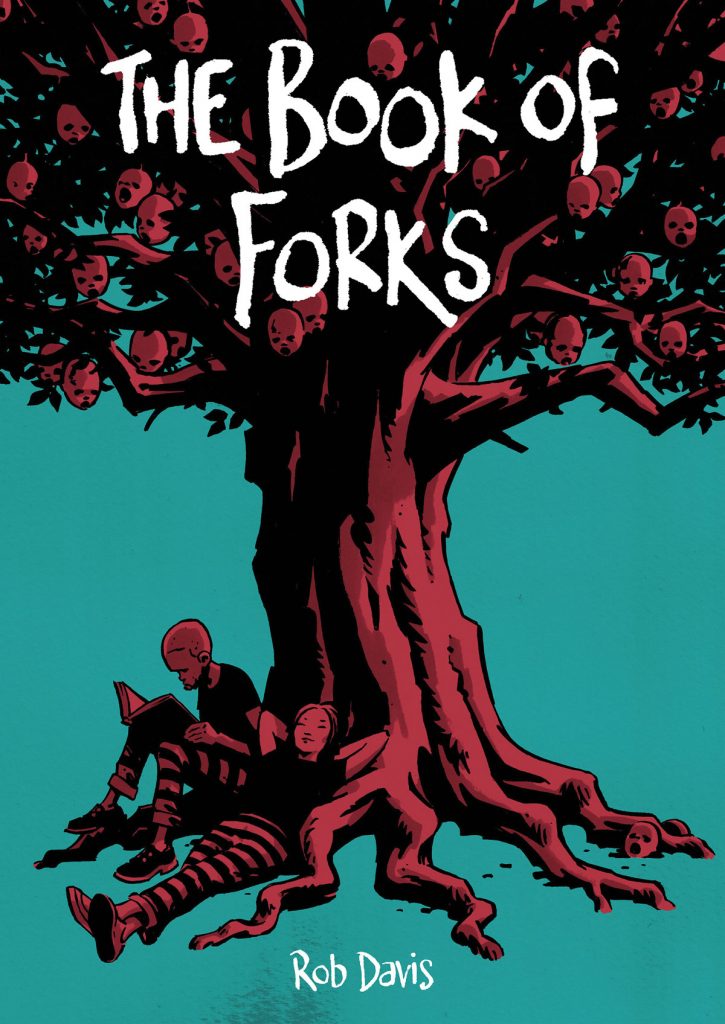 Following on from the fascinating, compelling, wonderfully unusual – and frequently disturbing – Motherless Oven and the Can Opener’s Daughter (reviewed here), Rob Davis completes his trilogy with The Book of Forks. It’s pretty fair to say I have been waiting eagerly for this, it has been high up on my list of must-reads for 2019’s releases, and I am glad to report I was not disappointed. I had the good fortune to chair a talk with Rob Davis and Karrie Fransman at the 2015 Edinburgh International Book Festival, where as well as elaborating on how he used the comics medium to imbue the book with a lot of symbolism (more than could have been achieved with prose alone), Rob also disclosed that he planned sequels, but, understandably those were reliant on the first book doing well enough for SMH to commission and publish the others. I am very, very glad that this happened…

While the Book of Forks includes our three main heroes, the schoolkids Scarper Lee (the boy whose Death Day was due in the first book), the plucky and irascible Vera Pike (the Can Opener’s Daughter) and Castro Smith (their friend with the unusual “brain aid” and an unusual way of seeing the odd world they live in), and a number of other players from the previous books getting a look-in (including Vera’s terrifying Mother, and the vile, old Stour Provost), the major focus here is, as in the previous two volumes, on one of them, this time Castro. Castro seems to be imprisoned in the unbelievably vast Factory (some of Rob’s art recalls the classic prison layouts as seen in Porridge etc), where he and others there follow a set routine, in-between which he is working on the titular Book of Forks, his attempts to lay down on paper what understandings he has made of the worlds of the Bear Park and Grave Acre, of the Mothers and Fathers, the household Gods and Weather Clocks. 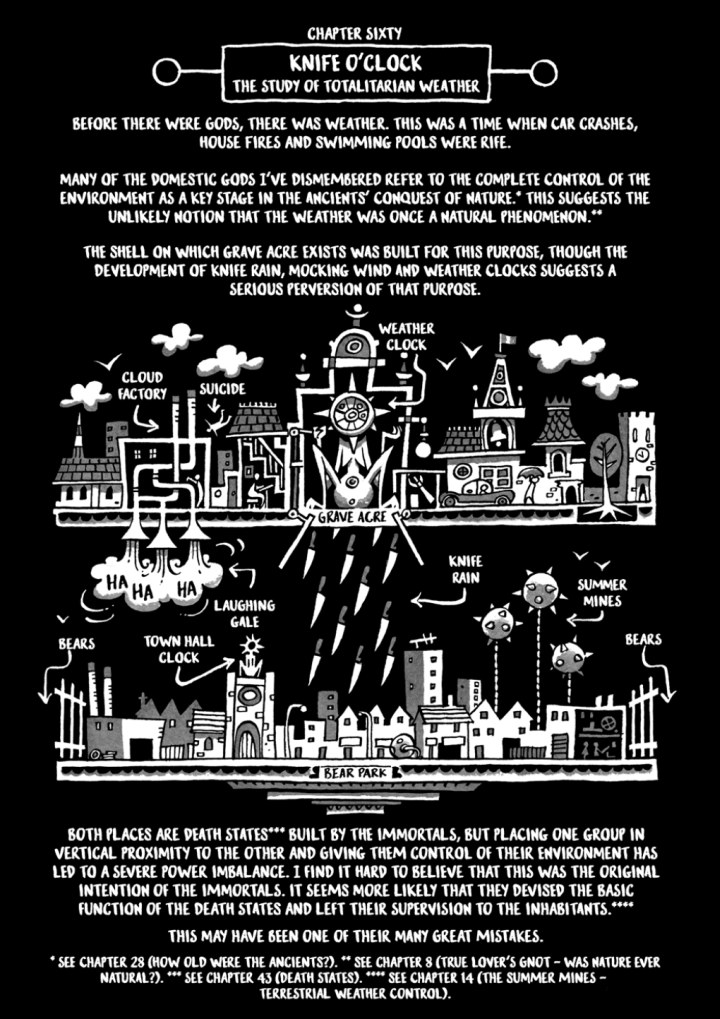 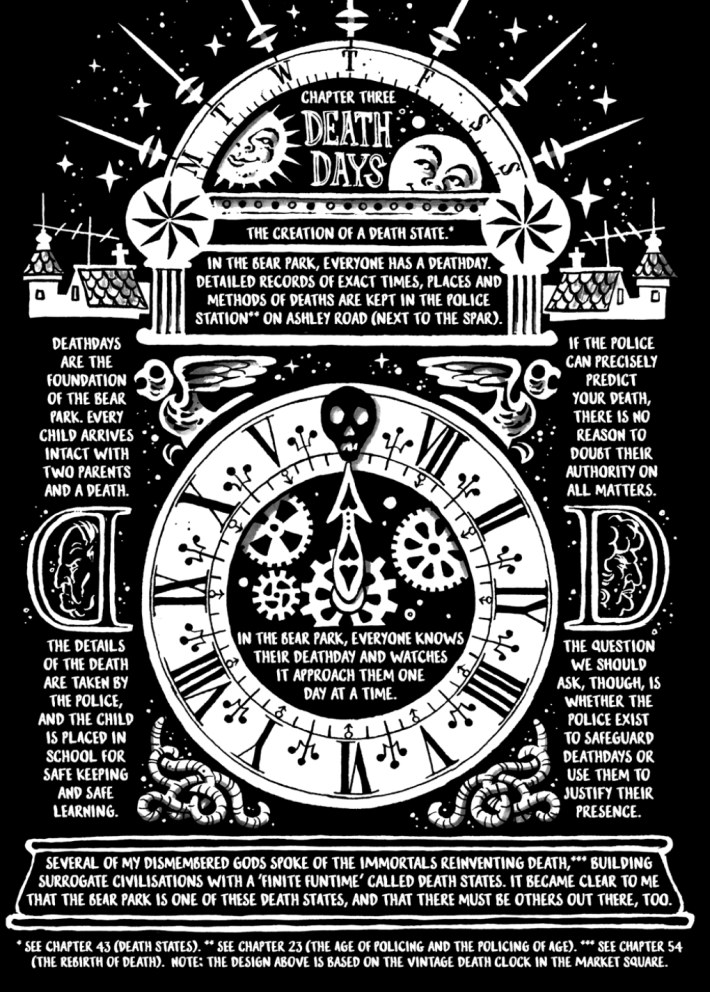 This is a terrific narrative device – it allows Davis to expand upon the worlds he has created in the previous books, those peculiar towns that seem in some ways so familiar to a sort of 1970s Britain and yet in other ways are bizarrely, often scarily different, to explore their mythology and origins and evolution as part of the actual story rather than a clumsy info-dump. As before the story is interspersed with single black pages with white-lined art – these are pages from Castro’s book – explaining different aspects and functions of these worlds, how they came to be, which made me think of a grotesquely odd version of the Hitch-hiker’s Guide.

It is through these pages, and the discoveries of the various characters on their journey, that we are slowly given a far larger picture of this world than we’ve had previously, a long history, involving ancient Immortals, “death states”, and heroic Postmen who move between the different states and may just be rebels fighting a system imposed on the people within them, adding a moral and philosophical element to the work that questions perceived societal norms and how they come about. 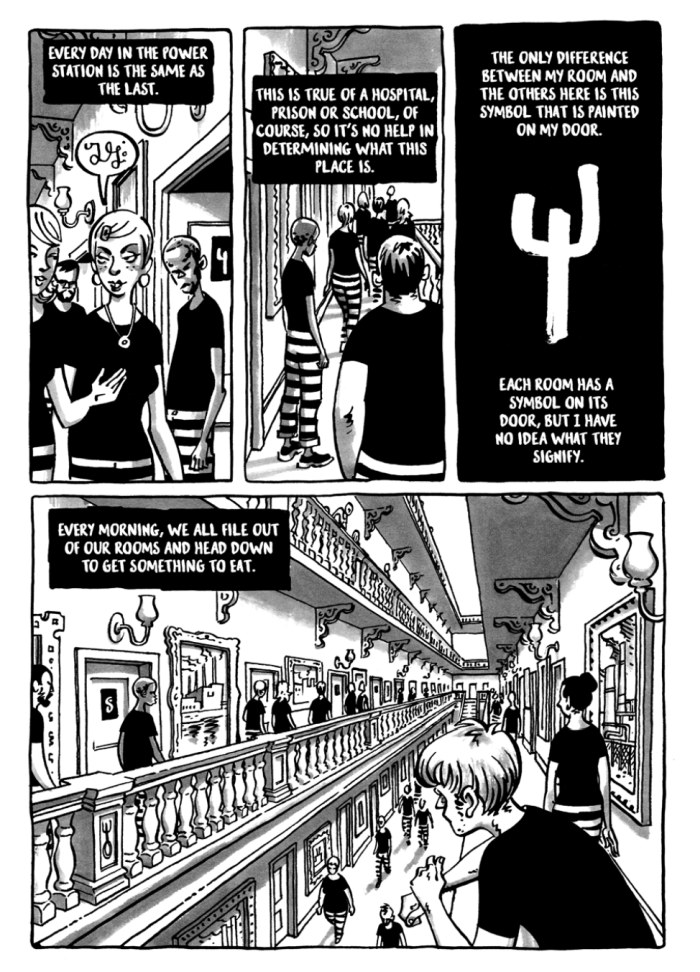 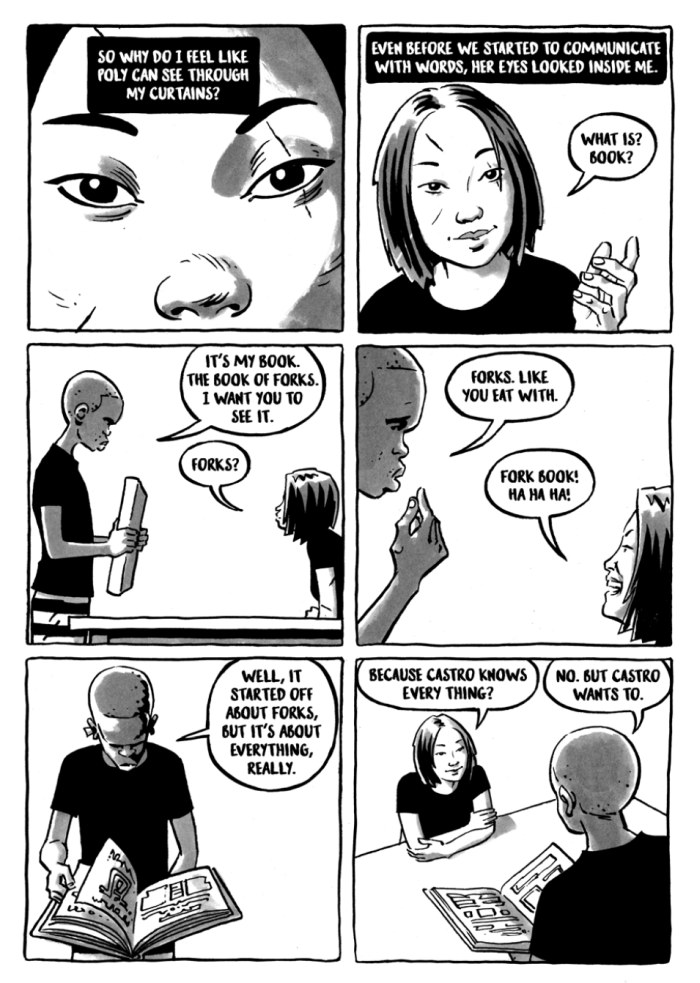 Scarper, still with his perma-frown, despite being rescued from death, and Vera, still troublesome and with that regular knowing smirk on her face, make up the other main component of this volume, seeking out their friend with dogged determination and bravery, and not a little resourcefulness. This element of the tale was as rewarding to me as Castro’s strand, partly for the adventure of it (they travel and dare, while Castro is mostly in one location, although his thoughts are free to travel, and do), but also for the way Davis develops their character.

The idea of travel and adventure bringing people closer, changing them into something new, something different and hopefully better is, of course, an old one, but it is mined here very well by Davis, and both Vera and Scarper grow as we watch them struggle to find their friend, relying more and more on one another, despite all their bickering. It’s clear throughout that Davis has a lot of respect and affection for his characters, and it shows, I think, in the way he allows them to breathe and develop here.

“It would be comforting to believe that the immortals were responsible for the cruel rules that govern us, but my evidence suggests we are doing this to ourselves. Perhaps the question to ask is not ‘why do we suffer?’ but ‘why do we wish to suffer?‘” 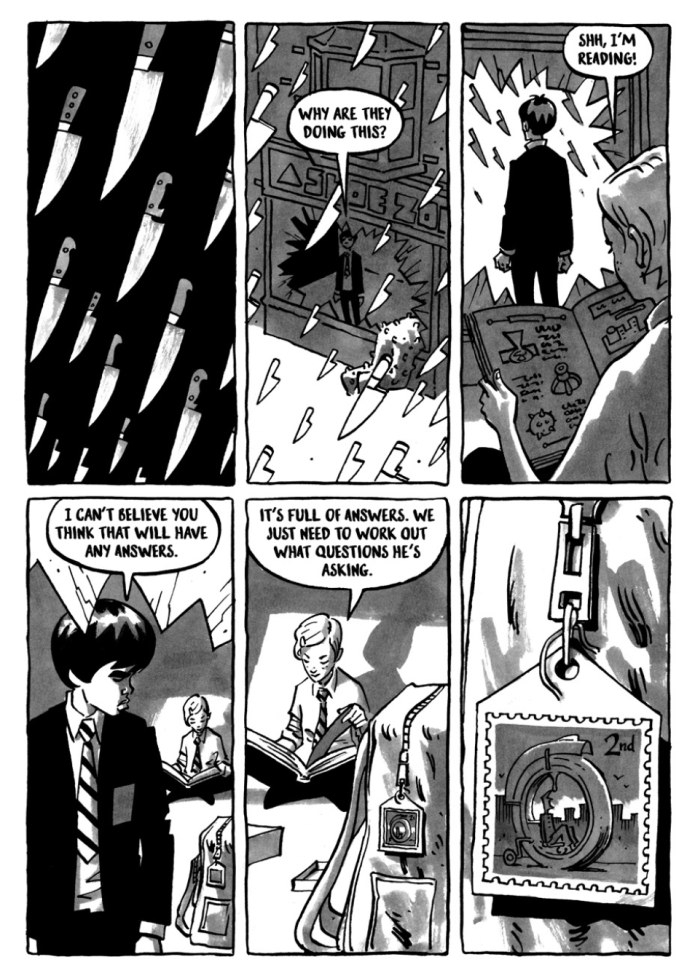 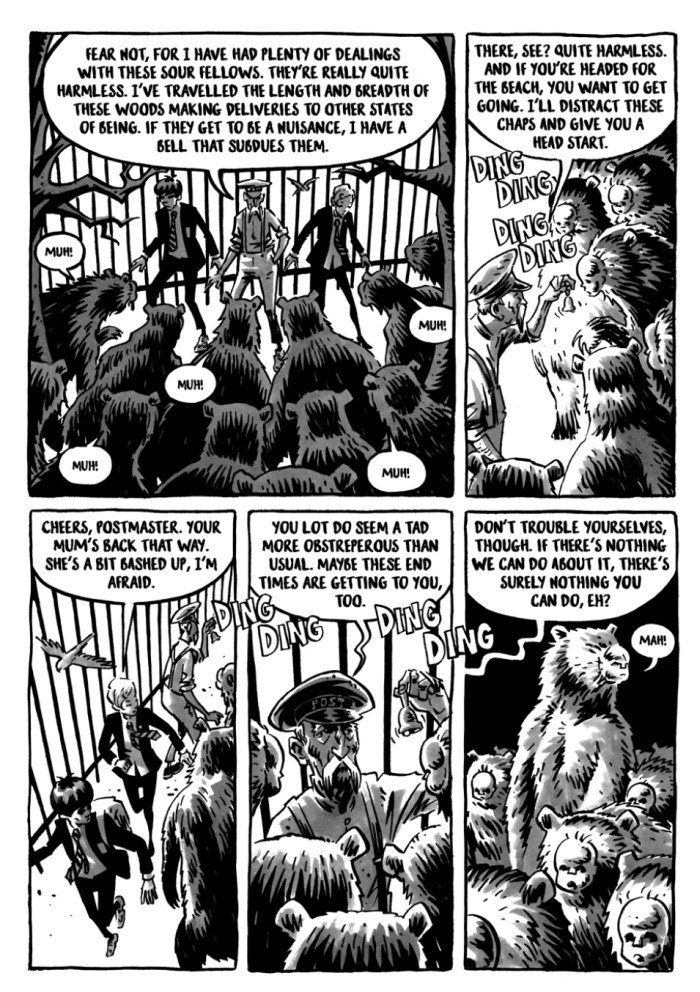 The black and white artwork is, once more, an absolute pleasure to behold. So much of the character interactions and the emotional heft of the narrative is carried in the way Davis deftly draws the expressions on the character’s faces, it works perfectly with the script to convey so much to the reader, not just story but emotional insights too, and that, of course, draws us as readers much deeper into the tale, makes us invest more in those characters and care for them (a single panel where Scarper and Vera, normally always arguing, run from a rain of knives and take scant cover, holding each other closely packs a huge amount of emotional information into that solitary frame).

Elsewhere the art conveys so much, from wonder (strange sea creatures, a Factory that touches the skies) to disturbing horror (bodies left hanging in the endless showers of knife rain, vast forests inside a library, the giant bears with faces of babies), and those intervening excerpts from the Book of Forks itself that Castro is working on – it’s a rich, rich stew and, like the earlier two books, one which will likely have most readers going back over it all again several times to drink in details and perhaps notice elements they missed before. 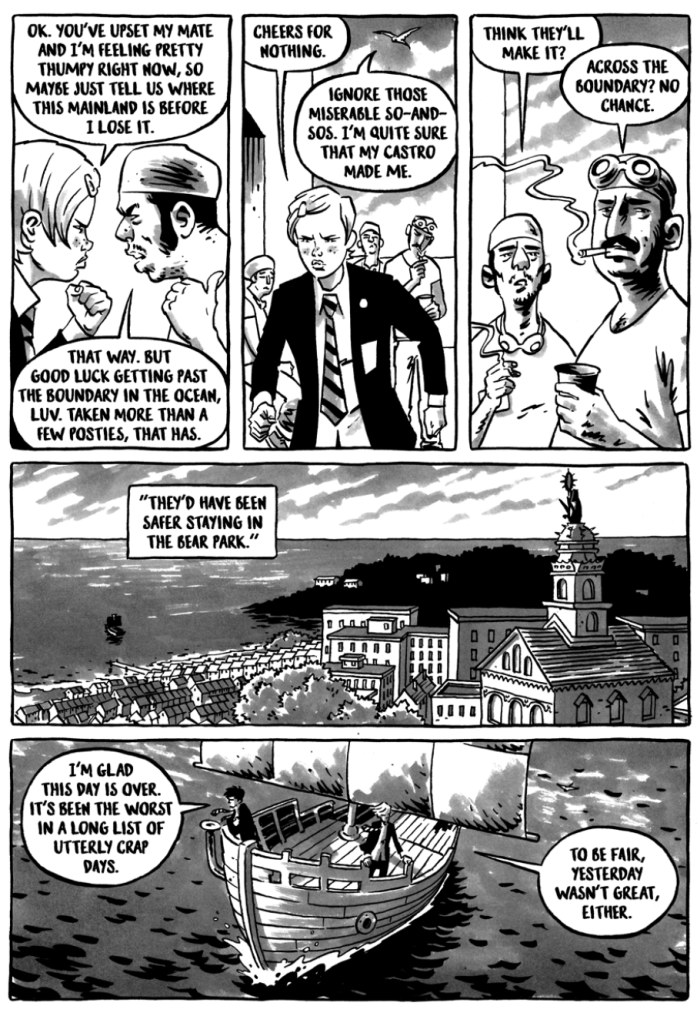 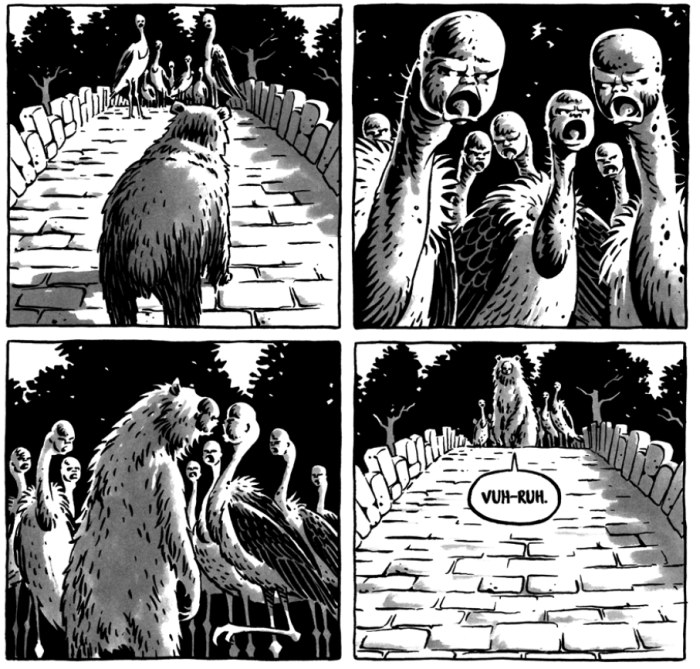 Naturally I won’t spoil this by discussing what happens – do Scarper and Vera find their missing friend, Castro? If so, what happens to them now, what happens to the worlds of the Bear Park and Grave Acre and other realms after so much disruption and death? Do they find out why their world is the way it is? You’ll have to read the books to find out. I will say, however, that quite often I have an intuition of where a story is going – not necessarily because the writer isn’t good, perhaps just because I’ve read so many books you get a feel for narrative flows sometimes and can guess where a tale is leading. I’ve not had that with any of the three volumes in this series, and that has been an added pleasure – I genuinely had no idea where Rob would take this story or the characters, and that made it all the more compelling to the final page. The entire trilogy is an absolute must-read, one of the more unusual, intriguing and frankly downright wonderful stories to emerge in recent Brit comics, in my opinion.