This charming old doo’cot is part of the estate around Elcho Castle in Fife, just a few miles from the River Tay: 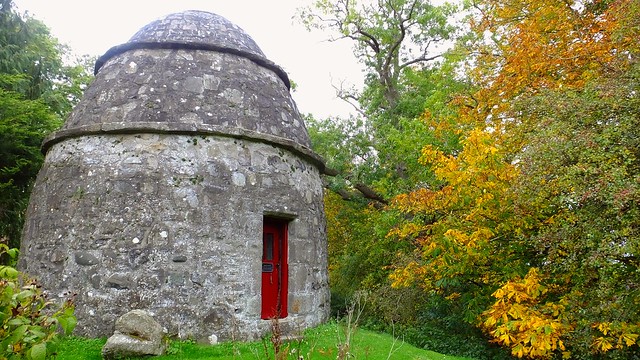 The inside is slowly being colonised by nature, ferns and creeping plants growing out of the stone nest ledges of this hive-shaped old dovecot, which gave it a particular beauty, I think: 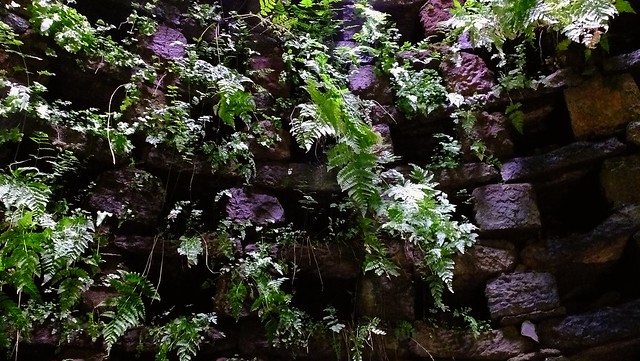 And looking up through the open roof to the sky beyond I liked the effect it made, and it just seemed like a scene that would work better in monochrome, so I switched to B&W mode on the camera and positioned myself looking straight up to get this: 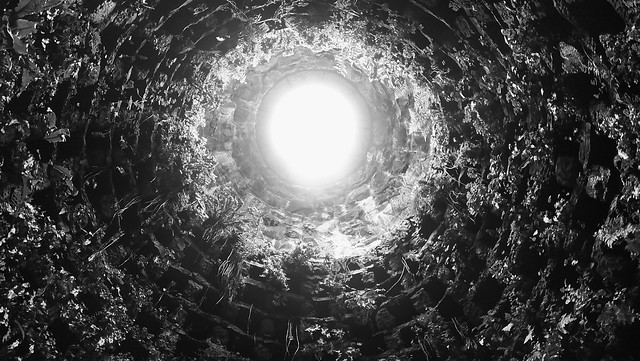 I’ve been meaning to take some photos around the gorgeous old cloisters that divide the two main quadrangles in Glasgow University for ages, and as I was visiting nearby Kelvingrove then walking past the Uni with chums on the way to Ashton Lane (a regular haunt from the old days, lovely wee cobbled back street with indy cinema, bars, restaurants and cafes), we paused at the uni so I could get a few shots. 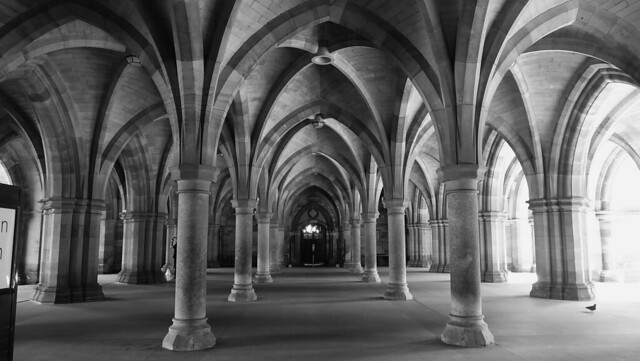 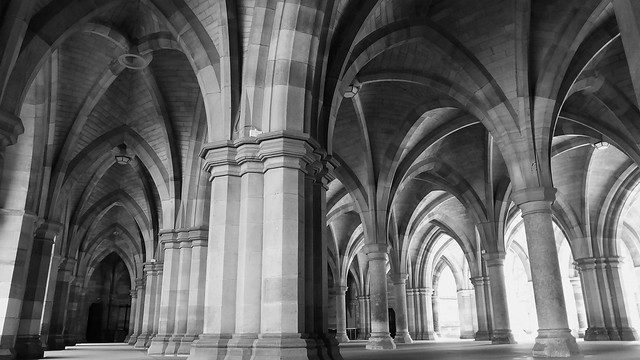 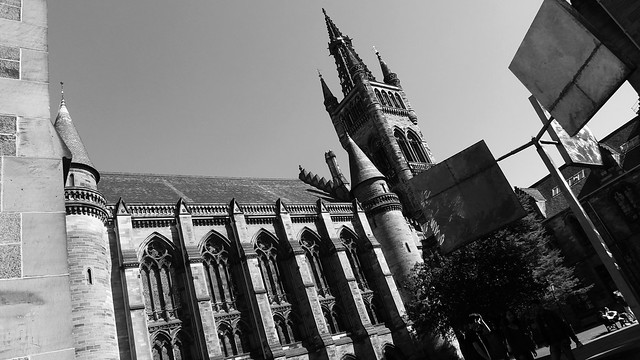 And behind which door is the stunning Mystery Prize??? Wandering around the New Town in Edinburgh, camera in hand, just liked these three doors grouped together, dread to think just how much the Georgian town houses behind those doors actually are worth though… What do a bunch of famous Brazilian street artists have in common with a historic Scottish castle? Well, they are painting graffiti all over it – at the invitation of the laird. Turns out Kelburn Castle, 35 miles west of Glasgow, was covered with a dodgy rendering a few decades back which is proving detrimental to the ancient stonework underneath it, so it will be coming off in the future. Meantime it provides an amazing temporary canvas for the Sao Paulo Crew to work their colourful designs on. Not often you see a historic castle being redecorated like this – its been on the Scottish news a lot in the last week or two and really made me smile. The month long project has an official site here with lots of pictures and some very cool time lapse videos of them working (when the Scottish weather doesn’t interrupt them).

The massive former Scottish and Newcastle Brewery site a few minutes up the road from me, right next to the cinema Mel and I regularly go to, is being demolished at last – it has been empty for some time (brewing was once big business in Edinburgh, probably why it is such a real ale city, but now it is mostly gone – thankfully the much better Caledonian Brewery is still going strong. This area was popular for brewing because of the pure water from local wells, the so-called ‘charmed circle’ of wells). There have been plans to redevelop it for years and finally they seem to be making progress – the site is so big it goes across both sides of the main road; now one half is totally gone – where the buildings and cooling towers and tall walls were there is just fields of rubble. Quite odd to walk past this spot which was so built up before and now I can see clear across it to the area beyond. Not the first time it has been redeveloped in the last century though, as the old tenement where Sir Sean Connery was born was next to it, but was demolished long ago. In fact, he used to deliver milk around there as a young lad – these days when he comes back to the area it is to walk the red carpet at Film Festival launches; talk about change.

In such a built up area near the city centre there obviously isn’t a lot of opportunity to remake areas, so I’m keen to see them do something nice with such an enormous brownfield site. We’re promised a mix of business spots, leisure and new homes with much-needed open spaces – this part of town lacks some decent open areas because it is so heavily built up. It all ties in with the revamp of the nearby canal, which now has lots of barges on it (some for holidays, some folks living on them year round), new flats overlooking it and waterside restaurants and cafes and a redone towpath for walking and cycling on which Mel and I make use of a lot (beats walking by the busy main road and you can feed the ducks as well as grab some nice photos). Of course, it may end up being a mess as these things can be sometimes, but hopefully they make a good job of it since it is going to be a big part of my local environment (and probably boost the already inflated housing prices) – they’ve put up a website for this new area, which they are going to call Springside and a short video, which also takes in some of the history of the Fountainbridge area.

I wonder if it will actually look like this when done. Always interesting to see something in transition; few years back a major brewery, then empty buildings, now rubble and in a couple of years people will have their homes there – in fact, a lot of people; this isn’t just a couple of old buildings, its a big site and will change the nature of the area a lot. Right now it is just an idea of a place; I think I will enjoy it being translated into a real place – if any part of a city can be said to be truly real, since some of it is always in our impressions of it and our imagination and our memories.

Behold the mysteries of the Great Pyramid revealed!

French architect Jean-Pierre Houdin (I wonder if he is related to the famous 19th century magician Robert Houdin, who later inspired the stage name for Harry Houdini?) claims to have solved the mystery of how the Great Pyramid of Cheops was built – he has a 3-D simulation available online (although you may need a plug-in to make it work and it takes ages to load), which will walk you through the theory or also allow you to ‘free navigate’ the 3-D reconstruction. There’s even a little Second Life-style animated person (presumably a virtual Monsieur Houdin) who walks on to narrate the theory part. Fascinating stuff.