In the wake of the resignation and disgrace of presidential aide Scooter there has been much debate in the media. However, we at the Gazette decided to go to someone who has known Scooter since he was an eager young lad, his friend who gave him his first job, Sir Kermit the Frog, OBE.

“We’re all devastated with the course Scooter’s life has taken,” confessed a clearly upset Kermit, looking distinctly off-colour. “But looking back it is easier to see that he has been going off the rails for some time.”

Kermit went on to explain that when Scooter first started as his aide on the Muppet show he was a delightful young chap, friednly, open, eager to please and impress his boss. However, as time went on he started to change, especially after he was converted to Republicanism by some evangelical GOPper missionaries. 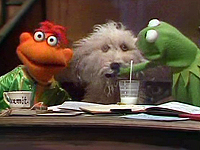 He became increasingly estranged from his liberal friends on the Muppet show, culminating in a tirade against the alternative lifestyle of Bert and Ernie as ‘un-natural’. In fact, many among the Muppets and cast still believe Scooter to be the one who leaked the truth about Bert and Ernie’s relationship. Recent events have tended to support this belief.

“As soon as he fell under the spell of this evil cult and began to believe in GOP, Scooter was lost to us,” commented Kermit sadly. “It’s the worst thing to happen to one of our former cast members since the Great Gonzo was caught in an adult theatre with Pewee Herman.”

Seriously though, what sort of dumb-ass name is ‘Scooter’??? How the hell did this numpty get a name like that? Was he a fan of the aforementioned Muppets character? Perhaps he was a serious Mod in his youth, tooling around Washington on his Vespa while singing to the Who? If that was the case it is unfortunate for Scooter Libby that Americans have looked at his lame story and declared they “won’t get fooled again.”