The eagerly anticipated Dalek episode of the new Who series came at last and left me a happy little geek. Plenty of nods to past hsitory but, like the new show in general, updated for a new age; they managed to evoke fear as the all-but-unstoppable machine creature goes on a killing rampage but also invoke compassion. And the revelation that their species perished in the ‘last great Time War’ along with all of the Time Lords except the Doctor just feeds this teasingly tasty back-story which is developin.

There was also a Neitzchen moral dilemma over fighting monsters and perhaps becoming one in the process, which tipped a nice little nod to the classic Tom Baker era Who story where his Doctor is sent back in time by the Time Lords to destroy the Daleks before they really begin; holding the detonator wires the Doctor faces an agonising decision – these are the most ruthless, evil creatures in history who kill millions on hundreds of worlds, but if he kills them now, effectively commits genocide, is he any better than they?

Also caught the new Hitchhiker’s movie at the weekend – it wasn’t great, but it wasn’t rubbish either. I enjoyed some scenes and appreciated the newer material but found the whole film rather ‘bitty’; it didn’t flow very well and the editing appeared to be done with a pair of hedge shears (and doesn’t the new Marvin look like a malformed Imperial Stormtrooper?). Still worth seeing and not a disaster but for this old-school Hitchhiker who does know where his towel is it didn’t really work. Much better was the final Hitchhiker’s radio series which began on BBC radio tonight. 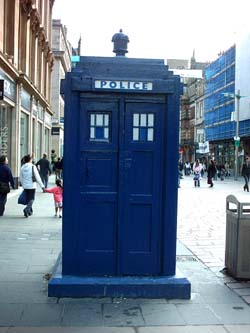 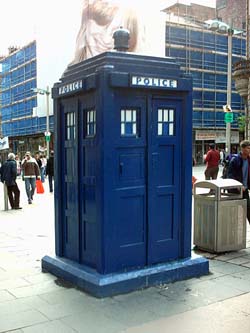 I snapped these while I was back in Glasgow on Sunday – I had to go over and give the old Police Box an affectionate pat. A lot of you won’t understand that, but those of a certain age will; these few remaining ones were always magical to me as a child. I knew they weren’t really Tardises but there was that little bit of you that hoped if you kept looking you’d see a familiar long scarf trailing out of the doors one day. The fact they really existed and I could see what looked like a Tardis was just wonderful to a wee boy with too much imagination.