The Spirit was willing

Sad news just in via Boing Boing – the legendary Will Eisner has passed away. Writers such as Neil Gaiman have been mentioning his illness and recent surgery, but unfortunately it seems to have been too much for the elderly illustrator. Anyone who reads comics, graphic novels or is jsut interested in quality storytelling will be aware of Eisner, most famous for The Spirit, (who was still working on new work despite his age of 87 – indeed Eisner awards are given for excellence, so highly is his work, and the man himself, regarded. He will be missed but leaves a large body of excellent work to inspire future generations of readers and writers.

On a slightly more upbeat note one of our local Edinburgh denizens, writer and keen proponent of automatic cat litter trays, Charlie Stross is on the cover with his chum and sometime collaborator the excellent Cory Doctorow (read Down and Out in the Magic Kingdom, it is fab) on the cover of this month’s Locus. 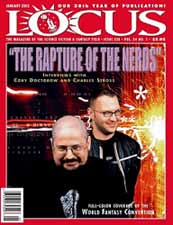 As you can see this is the special edition of Locus where two exciting SF writers take their stand, one for having hair only on the lower part of the skull and one for having it on top.