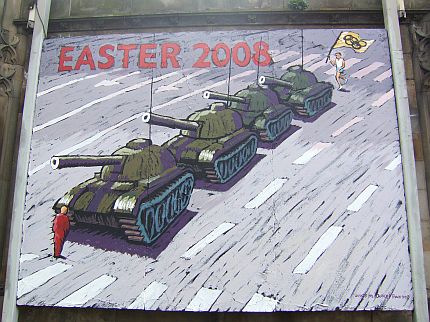 Saint John’s church at the corner of Princes Street in Edinburgh, below the Castle, has appeared on here a number of times over the years because of the always interesting painting which the minister and some artists often put up on a board by the side of the church; often they comment on current events and morality and I always find it heartening to see them so prominently displayed so everyone travelling along Princes Street sees them. I was in town with Mel this afternoon when I noticed this one they had created for Easter; given the news today about the ceremony for the lighting of the Olympic torch it became doubly appropriate.

In case you missed it, as the head of the Beijing Olympic committee rose to make his speech at the traditional lighting of the Olympic torch before it is carried through various nations before going to China some pro-Tibet protestors got through the security. Sadly the television cameras rapidly panned away from the scene until they had been removed, which I consider to be utterly shameful, craven and cowardly. If China doesn’t like it, cobblers to them, but don’t censor such a broadcast to the rest of the world you spineless cretins. Further protests took part along the route as the first runner carried the torch, with local Greeks apparently being somewhat surprised and bemused by cries of Free Tibet, which strikes me as rather odd – considering Greece was under the dictatorial rule of the Ottoman Turks for centuries, fighting for its freedom you’d think the Greeks would have been applauding the pro-Tibetan supporters.

Personally I hope the progress of the torch around the globe continues to attract these kinds of protests – I’m tired of people making excuses about keeping politics out of this and how it detracts from the Games and from the symbol of the international spirit of co-operation and peace the torch symbolises. Let’s be honest, the minute it was decided it was okay to host the Games in a country with an appalling human rights record, a country which keeps down another culture by force, which restricts its own citizens, stifles freedom of speech (often with the help of major web companies, to their shame) and even harvests the organs of executed criminals (and in a state like China do you want to bet all those executed were vicious criminals or just people they wanted rid of?). A country who, when their leader visited London complained to the Prime Minister that people were ‘allowed’ to protest his country’s policies in public on his route in. Bollocks to them. Humiliate and embarrass the totalitarian sods at every single public venue while the world’s media eye is focussed on them. They wanted the Games for international recognition, they have to take the flipside of that which is increased visibility of the shortcomings of their country’s vicious policies too.

And if any Olympians are still whining about it all detracting from the games then to hell with them – human rights are more important than some numpty in shorts running round a track and rather than attacking demonstrators they should perhaps be questioning their own morality in taking part in games held in such a land.