Very early on Saturday I headed out, still half asleep, to Edinburgh Airport to catch a flight down to Bristol for the Comics Expo (which I’ve written up on the FPI blog and posted more pics of on a Flickr set here). I still can’t quite work out why flying by jet is cheaper than travelling by train, but it is and obviously a lot faster. Well, the flying part is, but first of all comes the part where you trudge out to the airport, shuffle past piles of people at this time of year who are obviously on their way to their holiday destinations, some optimists among them clad only in shorts and espadrilles despite the fact it is a cold, wet, grey early morning here and they aren’t in Ibiza yet. Get there by the required time for check in so you can then spend over an hour sitting around in the departure lounge – flying is fast, but the waiting at the airport bit is tedious, a hurry up and wait system in action. And as I am sitting there at an ungodly early hour I hear my name and find myself next to someone I haven’t seen in years who used to share a flat with one of my best friends when we were students. Small world.

Eventually called for our flight I troop down the ramp only to join another waiting line which eventually moves and out we go to get crammed into an Airbus, where I’m lucky enough to have a window seat. I haven’t flown in a number of years – I’ve been lucky enough to have trips in cool little light aircraft, turboprops, jetliners and even a helicopter before, but I’ve not even been on a cheap package flight in years. Most of the tedium of the check-in, security rules (there is a huge perspex box of abandoned Swiss Army knives by the security entrance) and the gouging prices of airport food spots fades away as the aircraft taxis to the end of the runway and those huge jet engines power up with a roar like a screaming dragon and I had that same fantastic feeling I always got from roller coaster rides (I rode my first proper roller coaster when I was about 5 or 6 with my dad, loved them ever since), the same feeling of anticipation, the moment before acceleration to take off is like the moment when the roller coaster gets to the top of the first hill and you know in seconds the gentle movement will explode into furious speed. Full power throttling down the tarmac, nose inclining, straining skywards then as the rear wheels join the front in the air you get that brilliant lurch in the stomach as your body realises there is no longer any solid ground beneath you.

I was originally hoping it would be a clear, sunny day like the ones we’ve enjoyed recently, but it was a dull, grey day, full of clouds, the sort of day Spike Milligan once described as “the sky being full of grey sponges” and I thought, damn, there goes a rare chance for me to see Edinburgh from the air. Within seconds the entire world vanished as the plane entered the low-lying clouds hanging over the capital; it was like being in the Daffy Duck cartoon when he runs off the end of the film frame into an off-white realm where nothing exists, the world now only the plane, the edge of reality defined by the end of the wing tips, beyond which there is only uniform blankness and I sigh, mentally missing the view I could have been having. And then a few moments later the plane pierces the top of the clouds and its like entering a new world. 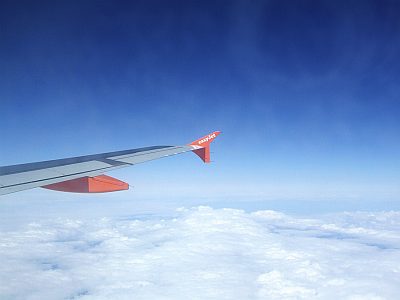 The world below in grey rain, the world of 30, 000 feet is above the clouds, which lie below me, a brilliant white as far as the eye can see, like looking down on vast fields of snowy Antarctic plains; above an incredibly clear sky and a blue above me which is a shade you simply never see from the ground, all lit by brilliant sunlight. It’s a miracle of engineering and human ingenuity and we take it for granted because so many of us so it now. How quickly we forget that it is only in the last century or so that we’ve been allowed to do something humans have dreamed of for thousands of years – we can fly. We can skip through a clear blue sky and look down upon the clouds from our loftier height. So many of us do it so often we forget how special it actually is, but just think on those generations of people who dreamed what it would be like in times gone past and here we are, we can do it and we spend more time talking about the pain in the bum of check-in… 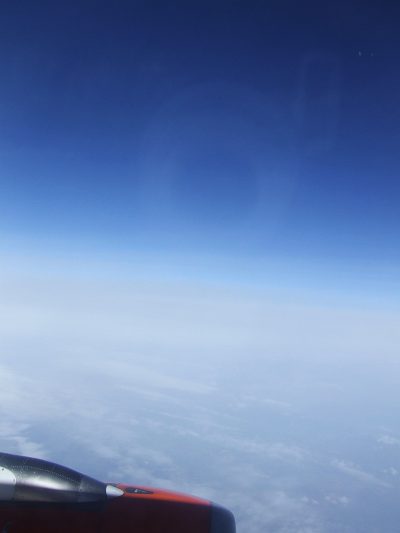 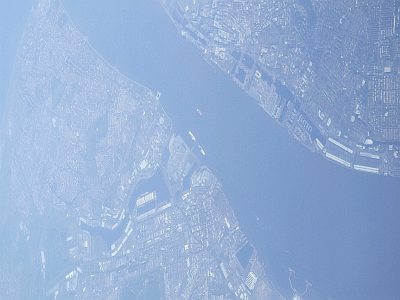 (I have no idea where this is, but it was one of the few glimpses of the ground I got through the clouds, not long after leaving Bristol while we were still climbing, somewhere on the far south west of England) 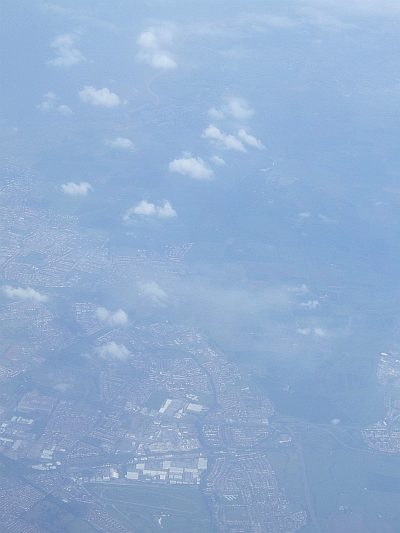