Nice item via Boing Boing where some academics have been analysing the unpaid parking tickets by dipomats in New York City – nice to see the ‘elite’ of the world attending the United Nations to help civilise the world by using their diplomatic immunity to piss all over local laws. Interesting to see the top ten violators – hmmm, mostly from pretty small and relatively powerless countries. Is breaking the law in the USA a form of compensation for these people, perhaps? And equally interesting that the more civilised countries (those who have lower crime rates and tend not to go round starting wars) are the ones who have diplomats who don’t abuse the privilige of immunity? Mind you, there is a nice update on Boing Boing pointing out the massive amount of money US embassy staff owe in unpaid congestion charges for London. These are the people tasked with trying to make sure the nations of the world get on amicably without resorting to violence… Gee, that explains why the place is such a mess… Hey kids, you may as well grow up to be rude, ignorant assholes, then you can get yourself a successful career as an international diplomat. 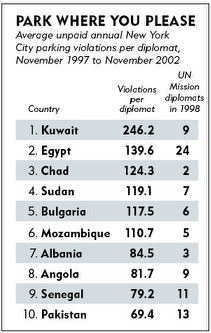